Today, I’m mindful of my time in the art of war.

War is a part of our shared human life, and I think life must be seen as a whole to appreciate its parts. Destructive as war is, it produced a personal value in me, a strength, far greater than my personal cost, once I resolved to find it. This value would necessarily have to be tremendous to justify the price I paid in war. I found it did.

War depends on hatred to exist. However, because this is a love based universe, the thing more powerful than hatred is love. We honor veterans because on behalf of love they face into evil and hatred, sacrificing themselves to affirm the right of others to love. Thereby earning, by the experience, the lessons of both. I found love’s lesson gained in war by realizing the effort of will it took to actually enter the nature of love itself after my war was over.

I found to love took a far greater effort of will than to wage war, even with destruction, personal injury, collateral damage, and horror. That was no small thing. This is how I know you as a veteran, are uniquely qualified to enter and express love itself.

Turns out love’s a great creative power and annihilates evil on contact in and around us.

From the beginning, humanity has struggled to learn and live love. Progress was made but, as a group, we have failed. Not through lack of seeing love’s value, we do, but from the lack of the surrender of personal will it takes to enter love and then the strength of will it takes to express that Love. While that combination of strength, surrender, and commitment can be learned through many of the terrible ordeals of life, none are better suited to do it than war.

Examples of those who have demonstrated that Will to Love is the great heroes of history and myth we honor even more than we honor our heroes of war who have stood against hatred.

After I was a marine in Vietnam, I worked to experience and express love, not fight hate. It was doubly difficult because to love I had to first love myself past what I had become in war. As I worked to overcome my personal stuff to enter the impersonal power of Love, I became aware of the tremendous strength of will in me, that I had earned in action and thought lost was a secret weapon waiting to be summoned.

A warriors “will” becomes so strong they can overcome impossible obstacles and face horrific things including express the creative power of pure love, which in war, it does not occur to us to do.

I also realized in doing this why so few in the world actually live love and how valuable it is to others when they do. This value of expressing the actual power of love, and not its sentiment, is in how it inspires those around them in the strengthening of the ability in them to do it as well. How many of our leaders now cannot stay positive with love?

I believe there are enough veterans in the world, on all sides of all wars, to claim this world for love, ending all war, if even a small portion of us make the commitment and take the stand. This is not about any religion or movement. It is about humans creating with love as war is about destroying it. I am a part of and will help, all who attempt this no matter who they are or where they have been or what they have done.

In my case, I had nothing to lose because I had nothing left. So rather than end myself, or live crippled, I took the time to investigate the idea of love as a healing power. Along the way, I realized the difficulty and the greatness of succeeding at it.

Like you, I am a sword that has been tempered in a fierce fire. While I do not desire to use that will ever again in war, in the actual expression of love as a polished power creating good, it is my great joy.

I know you can do this if you want to, and if you try you will heal from your wounds. I also recognize those who master the power to love can end the war before it starts. They are the warriors of the future if humanity is to have one.

The free tools on this web page are a great place to start.

Have a great Memorial Day! 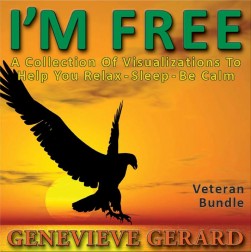 Although you can purchase this set at any time, this free gift offer is only valid Memorial Day and Veterans Day weekends. Veterans download yours now.